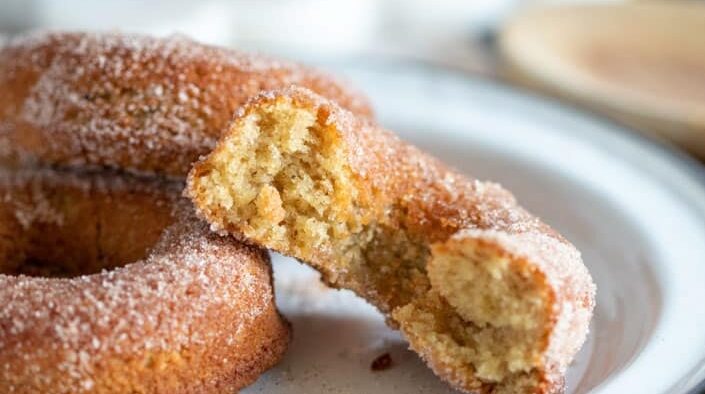 These Keto Cinnamon donuts are very simple and easy to make, but are so delicious. You can store these donuts in the refrigerator for up to one week, which makes them the perfect on the go Keto snack. Just pop them in the microwave for 20 seconds and they are ready to eat.

2. In a large bowl, stir together the almond flour, erythritol, baking powder, cinnamon, and sea salt.

3. In a small bowl, whisk together the melted butter, almond milk, egg, and vanilla extract. Whisk the wet mixture into the dry mixture.

4. Transfer the batter evenly into the donut cavities, filling them 3/4 of the way. Bake for about 22-28 minutes (or longer for a silicone pan!), until dark golden brown. Cool until donuts are easy to remove from the pan.

5. Meanwhile, in a small bowl, stir together the erythritol and cinnamon for the coating.

6. When the donuts have cooled enough to easily remove from the molds, transfer them to a cutting board. Brush both sides of one donut with butter, then press/roll in the sweetener/cinnamon mixture to coat. Repeat with the remaining donuts

If anyone wants more Delicious Keto and Low Carb Recipe so Join My New Groups Here you can get best and new Recipes>>>,Keto Club Recipes